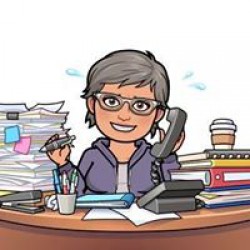 Doing It at the Dixie Dew: A Mystery 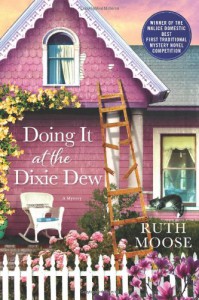 Doing It at the Dixie Dew is a divine debut!

Our first home was right next to a PBP (Pepto Bismol Pink) house so the cover grabbed by attention right away. Then when I had the book in my hands and started reading about Beth McKenzie returning to Littleboro, North Carolina, because her grandmother was dying I was drawn right in. She made sure her “Mama Alice” had the best of care until she passed. That left Beth with an old Southern Mansion that needed a lot of work and not enough money to do it all. But she got enough done to open a B&B and The Dixie Dew became a reality.

Lavinia Lovingood arrived as the first guest but sadly she checked out early and permanently from this earth the next day. Three days later a young priest is murdered and we learn Lavinia’s death was murder too! Not a great start for The Dixie Dew. Enter Ossie Delbardo, cop without a clue. Littleboro has a very low crime rate and because Beth is newly back in town it has be all her fault. Well hold on tight, she is not taking is accusations ans insinuations lightly. She will find out whodunit x 2 all on her own.

Classic small town and some of the characters take quirky to an all time high. The basically normal folks include Beth, of course. Ida Plum had known Mama Alice for years and basically hires herself to help Beth with the B&B. Beth’s contractor is in her corner and willing to help in any way he can. For me he sounds like one “McDreamy” of a guy who wears a tool belt. The rest I will leave for you to read about and classify.

This is a book full of Southern charm and funny moments. The plot ebbed and flowed naturally as Beth pondered and wandered to get the clues to fall in place. But there were some places where I sat up straight and gripped the book tightly, almost holding my breath until things were resolved for those moments and then again as everything fell into place for Beth at a very scary time and place. My heart was actually racing and for just a second I thought there was going to be a horrible twist. Thankfully I was completely wrong.

I was so surprised to learn the author wrote this story 27 years ago. It had won the Malice Domestic St.Martin’s Press Award for first novel. Then in 2014, she updated it and it was released in the form available today. Next Tuesday, Wedding Bell Blues, will be released picking up where this story left off. For those of you that have waited all those years to return to Littleboro, your wait is almost over. I am so lucky because I get to read them back to back.
Tweet